Every so often, there is a social phenomenon or fad that fills society to the brim, grabs the attention of your students, and spills into the classroom. Such was the case recently with the Mannequin Challenge. There were numerous times where I would walk in the classroom from the hallway from the back of the line, and my 4th graders would spontaneously freeze in place after someone had shouted “mannequin challenge!” This would only last a few seconds, and they would find great humor in the fact that their teacher would often participate and freeze in place, as well.

When there is a social phenomenon so engaging that students will voluntarily and spontaneously participate in it in class, it would behoove educators to ask how they can utilize this in their classroom. After some thinking, I came up with the Mannequin Book Challenge. This is a class-to-class partnership activity we did through Skype. Our partner class was Scott Bedley’s 5th grade class in California. My class came up with 10 books that were well known classics or currently popular, books that students in both classes would easily recognize. I shared that list with our Mr. Bedley. Each class then decided on a specific scene from one of the books on the list. We practiced acting, or freezing, out the scene and constructed any props or decorations needed to help set the stage for the activity.

My class acted out the chess scene from the first Harry Potter book. They assigned roles, measured and constructed the paper for transforming the floor into a chessboard, and gave constructive feedback to one another when practicing their parts. When the time came to do the activity, we Skyped with Mr. Bedley’s class and each class took turns freezing in their scene for about 20 seconds. I paused the video on Skype while my students got in and out of position. The other class then had to guess which book and scene we were depicting. It was a great way to pull in a culturally-relevant activity while giving students a creative way to share their knowledge of a book to a real-world audience! 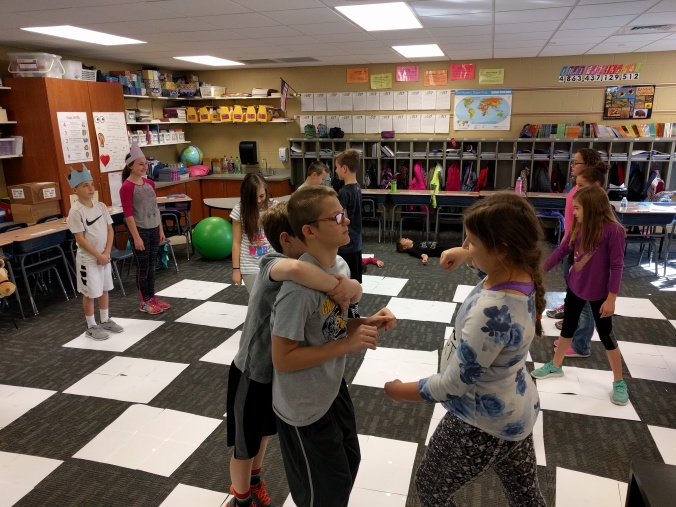